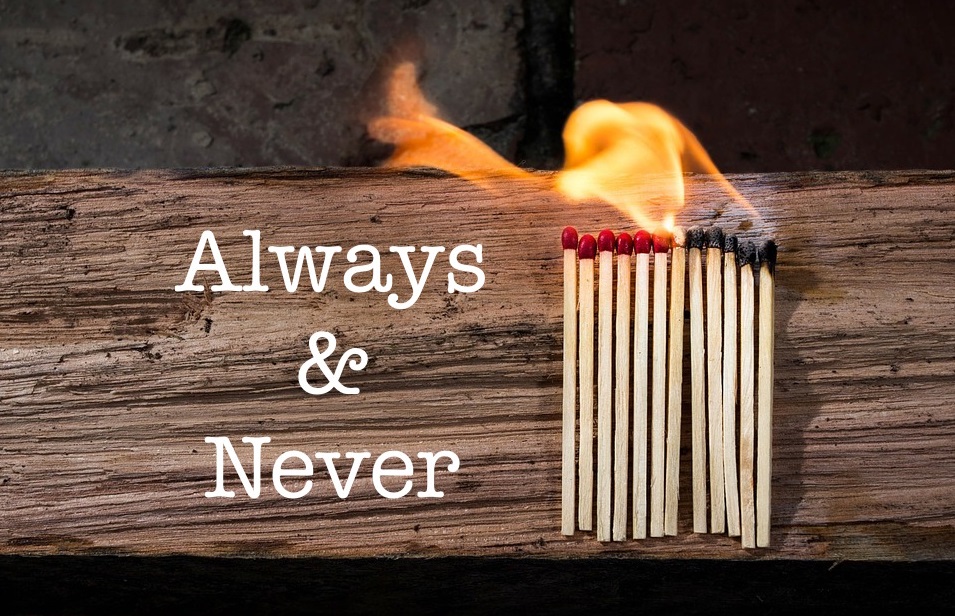 “Only a Sith deals in such absolutes.” Obi-Wan Kenobi.  I couldn’t help myself. I had to open with that. The entire Star Wars franchise depicts the Sith as evil and selfish, so when I started thinking about these two words that express absolutes – always and never – I immediately attached them to “the Sith.” And, if you remember that scene in the movie, it certainly did start a fight. That isn’t to say that either or both are evil, but they are certainly limiting beyond anything we should desire. After all, unless you’re limiting suffering or regret, why would you want to put limits on yourself at all?

Think about this for a minute: yes, those words are absolutes. Per dictionary.com:

Always: every time; on every occasion; without exception. All the time; continuously; uninterruptedly. Forever.

Never: not ever; at no time. Not at all; absolutely not. To no extent or degree.

When you think about it, there are very rare occasions when the use of such absolutes in your statements is truly applicable. Our challenge is that if we use the words often enough in our speech, they become habit and when you start thinking with these absolutes incorporated into your thoughts it can become more than counterproductive. It can become downright destructive. On the other hand, if you use these absolutes the right way, they can serve to empower you and help you stay motivated to pursue your goals.

While I would normally encourage anyone to always avoid absolutes, there are occasions that demonstrate exactly why such absolutes shouldn’t be used.  If you’re using “always” to say or think things like, “I will always chase my dreams,” then it’s a positive outlook. If you’re using “never” for such thoughts or statements as, “I will never be defeated,” then it’s equally positive.

Some examples of negative uses of “always” or “never” would include: “I can never get a break,” or, “I always lose at everything.” Both those statements focus on the negative side of things and only exacerbate whatever situation by decreasing your ability to find a solution to whatever problem or challenge you’re facing.

The additional challenge of using these absolutes is that they limit our thinking if we use them too much.  If you always think that you’ll never enjoy anything, win anything, succeed in anything, then such thinking becomes a habit and pretty soon you’ve conditioned yourself to always believe that things will never go your way. That becomes a self-fulfilling prophecy. Don’t do that. 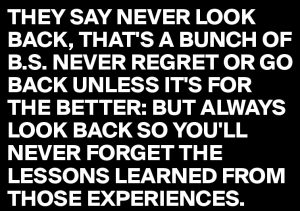 Think the positive thoughts. Use absolutes in a manner that always keeps you motivated and never brings you down. Remember that simply because they are absolutes, you should carefully consider every use of them. Those nit-picky pieces of the definitions can make huge differences. “Without exception” and “at no time” are opposites and should be kept in careful balance. Very few things that we do or that happen to us always happen. Very few things that we don’t succeed in or that rarely happen to us never happen. There are exceptions to “the rule.” What’s “normal” isn’t always or never.  It’s just normal… or average.

So pay attention to your words and thoughts and recognize how often you do (or don’t) use these absolutes and in what way you use them. Always make changes that improve your life, your outlook and your motivation. Never make changes that negatively impact those things.