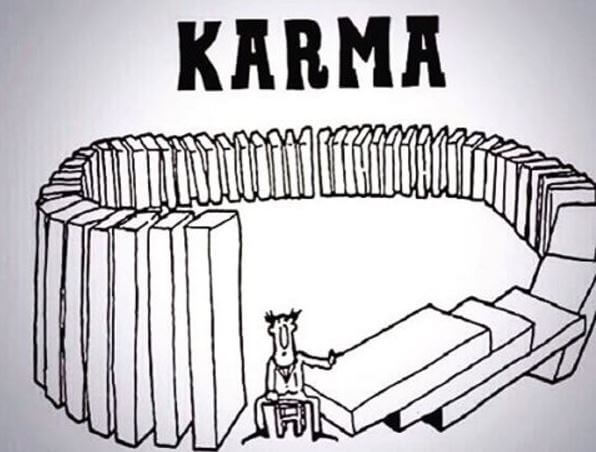 Nearly every day of my life I hear someone say, “Karma’s a bitch,” or, “Watch what you do; you don’t want Karma visiting it back on you.” Both of these statements indicate a belief in a higher power, even though most of us don’t think of it that way. We tend to talk about karma as if it’s some universal power that builds up and dishes out negative energy based on what we feed into it. The part that is much less discussed or heard about is GOOD karma, but if you take into consideration the possibility of both good and bad karma, and the rewards or punishments visited back upon you based on your actions, you’re really talking about a religious faith… at least of sorts.

Karma IS part of a couple of religions. According to dictionary.com (my favorite source for definitions) Karma is defined as: 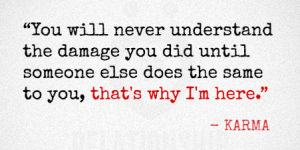 For the sake of this article, let’s ignore definition number one. It defines Karma in the framework of how it is used in or pertains to two specific religions. In fact, as most people use the word “karma,” I believe that definitions number 2 and 4 are the most applicable for this conversation. Number two defines karma in the manner it’s used for a religious philosophy (theosophy – any of various forms of philosophical or religious thought based on a mystical insight into the divine nature). Number four defines karma in the manner most commonly used as I described in the opening paragraph; that is to say, in common conversation and thought.

My most common response when someone says, “Karma’s a bitch,” is to reply with, “No, it’s not. Karma is in the customer service business. It delivers what you order.” Most people I say that to chuckle and agree and make some comment on how they like that outlook. When the conversation goes farther than that, they often say they like it because it implies good karma as much as recognizing bad karma. If we change “good” to “positive” and “bad” to “negative,” then we can gain a little more insight and application for the concept of karma.  It also helps me make my point a bit clearer.

While most of us don’t think about it in depth when we use the term, when we talk about karma in the casual fashion we are indicating a belief in something that is beyond us; beyond our control, and which visits on us reward or punishment for our beliefs, words and actions. “Be careful what you say. Karma’s a bitch.” In other words, “Your words indicate your thoughts, and you need to monitor them both because Karma will feed you back what you feed into it.” That’s actually good news if you’re a reasonably positive person.

If you feed out negative feelings, emotions, thoughts formed into words and actions that are negative, then you’re feeding your negativity into the world around you. If karma is real, then that negative energy is going to be revisited or returned to you in some way. If that happens, then people say, “Karma’s a bitch.” On the other hand, if you focus on the positive thoughts and feelings, letting them feed your words and deeds, then you give out all that positive energy and if THAT comes back to you, no one says, “Oh, look – good Karma!”  What you hear instead is, “Good things happen to good people,” or, “Miracles do happen!”

No matter whether you’re giving out good or bad energy, if you think that karma is going to bring it back onto you, then you have a belief in something beyond yourself; something beyond your power to control. If you further let your belief in that “something” guide your actions in any way; if you let your fear of bad karma keep you focused on good energy; if you use your belief in karma to motivate you to stay focused on the good… if any of those apply to you, then you believe in Karma and use it as a moral compass of sorts.

Is that not religion? The belief in something greater or beyond ourselves that we use to guide our feelings, thoughts, statements and actions for fear of punishment or in pursuit of reward. That sounds an awful lot like most religions to me. So, what’s the difference?

No one worships a deity named “Karma.” There are no temples built to Karma. There is no holy book written to give you specific guidance on how Karma wants you to live your life. Minus this deification, place of worship and guiding holy book, belief in Karma isn’t viewed as a religion, because it IS vastly different from all the biggies. As different as it may be, does that make it any less of a religion? IS it not still a faith of sorts?

That is a matter of personal perception and certainly believing in Karma can be done side by side or in conjunction with practicing the precepts of any other religion as well… UNLESS your religion requires you to perform negative actions or to deliver negativity onto others. But be realistic with yourself: if you find yourself thinking about what you’re about to do and how karma may visit it back on you, you are letting your belief in something greater than yourself affect your behavior. THAT could be easily interpreted as religious guidance. And that’s okay. In fact, it’s pretty cool, but don’t then turn around and say you don’t have faith or practice any religion. Don’t be in denial about your own outlook and motivations. Here’s maybe the biggest part to consider: If you think about karma as it’s going to visit someone else, you STILL believe in karma. Don’t deny your own faith. 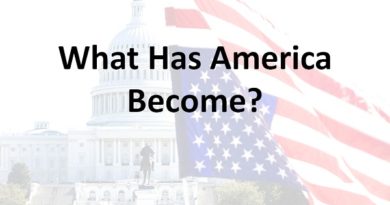 What Has America Become? 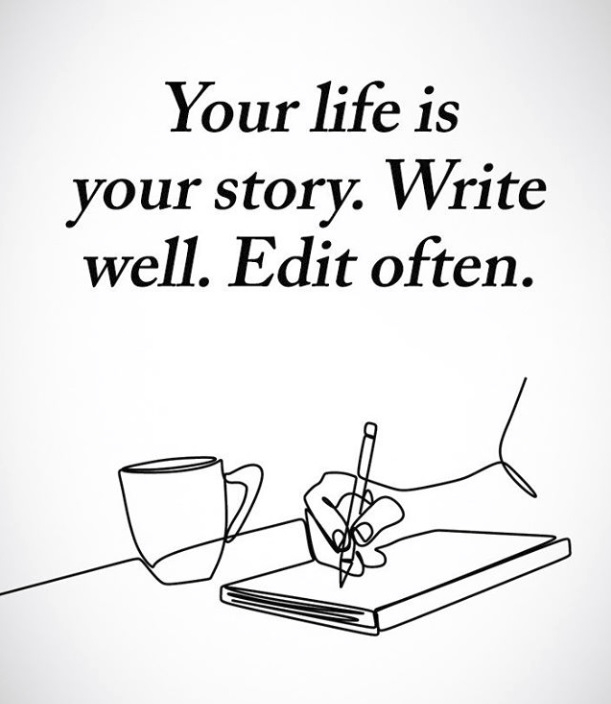 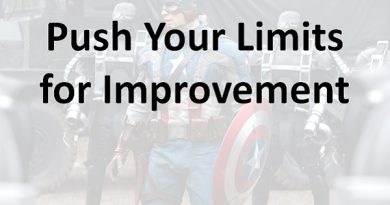