For ten years now the show NCIS has been a fairly popular show.  Leroy Jethro Gibbs or more simply “Gibbs” has been quoting rules and teaching them to his team all that time.  Some I agree with; some I don’t, but “Gibbs’ Rules” finally inspired me to write out some of my own.  Rule number 1: Just don’t quit.

It may seem overly simple but when you think about it, not quitting is the essence of virtually every success.  From our earliest age we make attempts at various activities, starting with rolling over, crawling and then walking.  We’re never successful on our first attempt but as babies we don’t know how to quit – so we keep trying.  The concept of quitting is something we learn along with language and (usually) social interaction.  “Three strikes and you’re out” is almost the stereotypical protocol for trying and then giving up if you don’t succeed.  Because of that very phrase- Three Strikes And You’re Out – I’ve had some people observe that quitting is built in to the structure of our national sport.  I disagree. 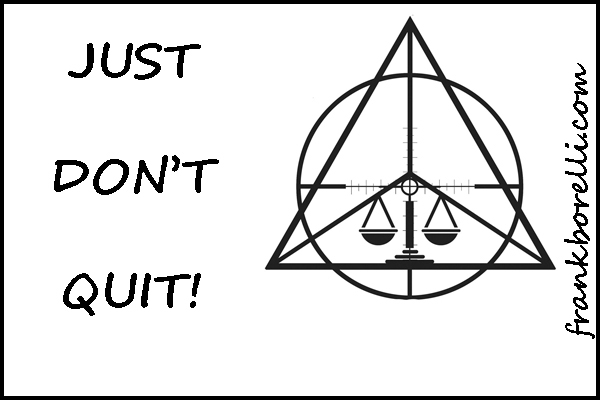 When you think about it, it takes three strikes to get out but it takes three outs before the field changes.  It can also take one hit – and a catch – and you’re out.  Sometimes that’s more painful than just striking out.  Hitting the ball gives you a big feeling of accomplishment and you can see and feel success (getting to base) in your mind.  Sometimes the player actually makes it to first base only to have the ball caught and be called out.

Think about this though: three strikes to an out.  Three outs per team per inning.  Nine innings per game (usually).  How many games per season?  (I can’t count them all.)  One team wins the World Series and then EVERYONE starts over again next season.  Just doing the single game math it takes 81 strikes to get enough outs to get through a game without a hit.  That’s 81 attempts to hit the ball.  That’s NOT QUITTING 81 times.

The truth is that there’s only one person in the world who can make you or talk you into quitting: that’s the person you see in the mirror.  Quitting is mental; it’s a decision.  It’s the result of deciding – consciously or not – that you believe you can’t accomplish the task you find before you.  You try and fail in a repetitive sequence until you decide that you will never succeed.  You TALK yourself into failure and therefore you quit.  It’s at that point that you have actually failed.

Several famous successes throughout history have been quoted about how many times they tried but didn’t succeed before they finally found success.  Had they quit anywhere along the way, we’d likely have never heard about them because they’d have failed in whatever endeavor we know them for.  Thomas Edison is the perfect example. Cited as having “failed” to make a working light bulb over 1,000 times, Edison said that he hadn’t failed.  He had simply learned 1,000 ways NOT to make a light bulb and that all led him to creating a light bulb that worked – his success.

None of us ever knows what our future holds.  We don’t know what we can do, but I promise you this: only YOU can decide what you CAN’T do.  Only YOU can decide to quit – and doom that particular venture to failure.  JUST DON’T QUIT and you’ll find out how much you enjoy success. And you know what?  Often, the harder you have to work for it, the more enjoyable it is to experience.