I was once told that everything I needed to know I learned in, or before, kindergarten. By then I had learned right from wrong and the rest was just judgment and balancing circumstances. In my own personal background, I have to believe that I learned some of my core values regarding honor, integrity, patriotism, and others by the time I was three. I believe that because my values in those regards are vastly different from most of the people I grew up around from the age of four on. I can only attribute that to the area I was raised in to the age of three and the outlooks of the people I had as my foster parents for those early formative years. What all that has to do with this week’s topic of “Talk or Fight?” is this: at some point in everyone’s life – and probably a lot more than once – a person has to decide whether they will stand up for themselves or be a willing (to some extent) victim. In pondering that decision, I started thinking about the personality characteristics of the people I know who obviously stand up to the fight, refusing to be a victim. Conversely, I also thought about the people I know who would rather not fight even if it means becoming a victim.

What is a common stereotype today is to match pacifism with:

The other side of that is the stereotype of matching a willing to do violence in defense of one’s self or others with:

Both stereotypes can be wrong, but some of the political leanings seem obvious and unavoidable. In the course of my adult life it has been obvious that Democrats are, by and large, a political party favoring gun control. By that I don’t mean that they like to hit what they shoot at. I mean they seem to favor restricting and / or prohibiting the private ownership of firearms. I remember well The Clinton Years of new gun legislation that was a waste of time. Those who voted for it must have simply been trying to earn favor with Clinton – because ten years later they didn’t vote to re-enact it.

Since we’ve had a Republican President, and with more states passing legislation favorable to firearms ownership and legal use, our country seemed to be leaning back toward an outlook of “don’t mess with me.” Just in the last month, since the mid-term elections and the Democrats making up the majority of the House and Senate (barely) I’ve already seen two new pieces of firearms legislation presented. The sharks are circling…

But I have to wonder: First, the Republicans aren’t the most pro-gun political party out there. I would think that the Libertarians are. Second, the pacifist will always lose the fight to the person willing to commit justified acts of violence. Third, our country was founded by a group of people who stood up and said, “No more,” to the King of England. Talk about asking for a fight.

But those people, our forefathers, felt that some things simply were worth fighting for. Liberty. Freedom. Peace. These were things that were valued and that they wanted to insure for all time for their families and descendants. Our country has certainly changed a lot in the past two hundred (plus) years, but that core values that made this country a special place haven’t changed at all. What seems to have changed – and I really hope I’m wrong – is the willingness of the citizens to stand up and fight for those values.

More and more I see the popular media talking about the soldiers we’ve lost in Iraq. Every loss is a tragedy to be sure. I mourn each and every one of them. BUT, they are soldiers and it’s a risky job. My son is in the midst of becoming one of them – so no one should be accusing me of being cavalier with someone else’s son’s life. I have served seven years in a military uniform myself. I believed enough in the values of this great country of ours to put myself in the position of risk. I believed that those values were worth fighting for. What’s more, I believed that the people of this country were worth fighting to protect.

Today – Five years and three months after the attacks of September 11th – if we’re to believe the popular media, more of the country is worried about saving a soldier’s life than preventing another terrorist attack. Personally I’d like to prevent all terrorist attacks without ever losing another soldier, but that’s not realistic. In deadly conflicts, people die. That’s why they’re called “deadly” – because that potential exists in every one of them. Our soldiers are trained and equipped to deal with that risk better than Joe Citizen walking down the street. I believe that we face the unfortunate reality of having our soldiers overseas insuring that the terrorists can’t redevelop enough of a capability to attack us again. The other option is bringing those soldiers home just to wait until the next attack.

The questions is, when will our way of life be so devastated and potentially infiltrated by terrorists on our own soil that the fight is here? When will we reach the point of having soldiers patrolling our own streets looking for IEDs along the sides of our own roads? When will we have to have armed soldiers at every school to keep out terrorists? When will places like Disney World have to have blatant overwhelming numbers of armed guards – armed with submachine guns and equipped with body armor – to keep the terrorists out?

Make no mistake about it, folks, those are our options. Five plus years ago, on September 12th, our country was ready to fight. We’d been hit. We got one hell of a bloody nose. Many of us learned fast – if we didn’t already know: you only have to hit me once in the face for me to know it hurts. But hurts not dead and, as the beautiful Shania Twain sings, “I’d rather die standing than live on my knees.” Yes, we got hit. And we got hit hard. That energized some and scared others. Here’s a secret: it scared the ones who were energized too; they just refuse to huddle up and wait for the next hit. They’d rather fight back and get in some licks of their own.

When I was seven years old the kid next door hit me. My mother saw it happen and when I looked over at her to do something she said, “Don’t look at me. He didn’t hit me. He hit you.” I got the message quick. Hit back. He didn’t want to give in and neither did I. Neither of us really wanted to continue to fight but, at least on my side, there was no choice. My mother made it clear to me that if I quit the fight she’d spank me – that I was better off staying in and winning the fight no matter how bad it hurt. When my father got home from work and saw my black eye and fat lip he only asked if I’d won or lost.

Our entire country got hit. We got one big bloody nose and two black eyes. Once we could see clearly we started fighting back. I like to think that Al-Qaeda would prefer not to be in the fight anymore. Libya made it real clear that it was a fight they didn’t want to get into. Afghanistan is far better off without Al-Qaeda running it. Iraq no longer has a genocidal dictator killing hundreds of thousands of people at a whim. But those items are the direct result of America standing up to the fight – not hunkering down in fear of the next bloody nose.

Yes, America is still a super power – and there simply aren’t many in the world. But the power of America came from the blood, sweat and tears of we, the citizens, who worked hard and made the country great. The strength of America comes not from our military weaponry but from the collective belief that we can and will stand up to anyone who dares test us – much less push us or throw a punch.

There are lots of bullies in the world today. We’ve stood up to them. There are lots of other wanna-be bullies who are trying to find a big enough bat to threaten us with. I know our country will never back down – but, again, if you believe the popular press, there are elected officials today who think we should back off. We haven’t won the fight but if we just give our enemy – our opponent – room to recover and back off then he will. Those elected officials are delusional. Bullies don’t learn their lesson until they’ve had their ass handed to them unequivocally. If we just hurt them a little then they’ll find a bigger bat and sneak up and hit us from behind. To prevent that we have to make sure that they understand:

We are the United States of America. We might quibble a little in amongst ourselves but collectively we will stand up to any and all enemies.

We will not be intimidated by any bully anywhere anytime. We will stand our ground and fight back.

We will always give as good as we get and we will not stop until the fight has been clearly and unquestionably decided – made obvious by the wrecked body of our opponent at our feet.

We will not run away from any fight.

We will not be threatened.

If you’re an elected official and you read those above six statements and disagree with them, please send me an email rebuttal and I’ll happily post it online without any edits. If you represent the United States of American and you aren’t willing to fight for it, then you certainly shouldn’t be on the taxpayers payroll.

Where do you stand? Do you talk while someone is kicking your *ss? Or do you fight? We are Americans. We Americans are what make America strong. We stand our ground. We draw lines in the sand and say, “It would be wise for you not to cross that because we won’t back up.” At least, we used to. There was a time when no country in the world craved a fight with us. Do you think we can get that back?

Not through negotiation. As General George S. Patton said, “Superior firepower is an invaluable tool when entering negotiations.” Our enemies will only be willing to negotiate with us when they perceive that we

CAN utterly destroy them without too much effort, and

That we have the will to do so and they are alive only because it suits our purposes.

Is that too harsh of an attitude to have? I don’t believe so. If you believe that it is then I invite you to visit the site where the World Trade Center towers once stood. I invite you to search “9 11 pentagon pictures” on Google and remember what it was like. I invite you to ask yourself whether or not you’d be happy with your grand-children living at the whim of another. If you won’t fight for you, what will it take? Will you fight for your children? Will you fight for your grandchildren? Find your line and draw it. Negotiations are great if you use the time gained to strengthen your position. 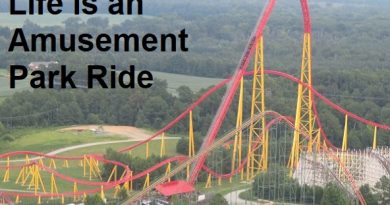 Life is an Amusement Park Ride