You only have to take a quick look around the Internet looking for “survival kit” and you’ll get inundated with options that range from small packs sized to fit in your pocket to trailers you tow behind your vehicle.  What you may not realize is that they all (if they’re any good) provide solutions for just a few basic needs:

Few of them include the last item on my survival pyramid: defense.  That’s because once you start selling guns it takes special permits (FFL) and becomes a logistics headache compared to selling every other item necessary for survival.  Most of them do include a device (or two) for signaling, such as a mirror or whistle, and some rudimentary basic tools such as a knife, maybe a pair of pliers, etc.

Last fall, as I was sitting around at my favorite cigar shop trying to come up with ideas for Christmas gifts, I found myself in possession of about five empty cigar boxes.  These boxes vary in size with the smallest being about 6”x5”x1.5” and the largest being about 10”x8”x3”.  It occurred to me that even the smallest one would hold quite a few basic survival necessities and, packaged in an ornate cigar box, such a small survival kit might make a cool gift.

I set about making my list of items that I’d want to include.  The list would have to have materials or supplies to provide shelter of some minimal kind, warmth in the form of a blanket and/or fire starter materials, some signaling device, cordage (if there’s room), a knife (obviously not a big one)…  The idea began to take shape and my list finally included: 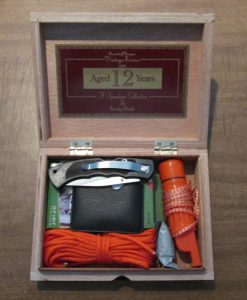 Now take a look at that list again and realize that the items, if packed tightly, really don’t take up much space.  That said, they DO provide for most of the survival basics: shelter, warmth, signaling, tools, etc.  I ended up with seven cigar boxes to start and began building the kits in a lazy fashion. In other words, I picked up miscellaneous items as I came across them at WalMart, Dick’s Sporting Goods, Bass Pro Shop, etc.  I would see items for sale online through my Facebook feed or via an email from some list I’m on.  Pretty soon I had the first kit complete and was well on my way to finishing the others.

I have no pictures of the first kit because it was gifted to a young man as a congratulations for attaining the rank of Cadet Colonel in the Civil Air Patrol.  This particular young man works in forests and studies wildlife biology as a college major.  I knew he kept a bugout bag in his truck and thought he might find a place for the cigar survival box.  At first he thought I was giving him a box of cigars and then, after he opened it, he saw the items and knew exactly what he was holding.  He appreciated that even more than he would have the 20 cigars that the box originally held.  His box held:

As I understand it, that box fits into a large general purpose utility pouch and is therefore easily carried on a MOLLE vest or on a suitable thigh platform. My second box was just recently completed and the recipient has already indicated that, once I had it to him, he intends to keep it in his car, under his driver’s seat, so if he’s ever stranded on the road he can simply grab that box and go (if he has to leave his car and walk to help).

Depending on the quality and name brand of the items you put into the box, packing such a kit can cost you less than $20 or upwards of $75.  You SHOULDN’T have to pay for an empty cigar box.  If you’re a cigar aficionado then you should have one lying around anyway.  If you’re not a cigar smoker, just visit your local shop and ask about empty boxes. In my experience, they usually give them away so there’s no cost to you in getting one (or more).

In my perfect world, I’d find an appropriately packed cigar box and here’s what I would put in it (with links to items):

Obviously, I’d need one of the larger cigar boxes but that list provides for redundant shelter/warmth capability, multiple signaling options, fire starter capability, a knife, a light and cordage for helping to construct shelter or snares.  The only thing I’ve left out that I would put in, if space permitted, is a small fishing kit.

So, that’s the concept: A Cigar Box Survival Kit.  If you end up building one, we’d love to see some pictures and know what you selected for contents. 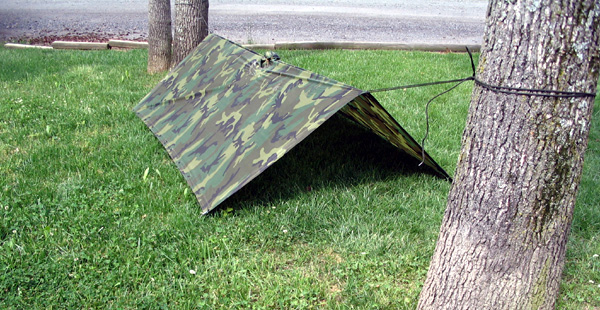