As I stood amongst some peers last week, bragging without shame about my children, one of the fellows kindly listening to me made the following statement: “The hope of our country is in our children, and if we don’t drastically change the societal message they’re getting, our future looks dim.” My very first reaction was to absolutely agree with him. My second reaction was the fearful realization of what that statement meant. I take great faith from some of the legislation that has been passed at the federal and state levels across recent years, but on the other hand, I’ve seen more than I’m interested in seeing on television and in movies. And most of what I’ve seen that I have no use for seems to be what the teenagers of today are drawn to like they’re addicted. The sad truth is that those movies, music videos, etc. are not ABOUT anything. They GLORIFY something, but most often that something is gore, sex, drugs, money, or some other extremely temporary “good time”. The combination of all of that really made me stop and think about our current teenage generation and what we should expect from them in about two decades when they’re running this country – or just taking over.

Such a memory brings me to wonder what exactly the teenagers and children of today should be learning before they are privileged enough to sit and watch fictional movies about people forced to saw off their limbs to escape, or insane killers who were thought to have drowned as children. Indeed, what should the children be learning?

There are the obvious answers such as reading, writing and arithmetic. Just as obvious we want all children to know right from wrong. But past that?

Someone once said (and I’m too lazy at the moment to look it up) that everything we need to know we learn in the sandbox. My wife and I have discussed how our children know right from wrong by the time they’re five years old. After that we’re simply teaching them to improve their judgement. Their judgement is based on their value system. We are also responsible for teaching them that value system. But the most important values for them to learn and understand are those which are abstract. Since most children aren’t even capable of abstract thought until they are about ten years old, it behooves us to teach them right from wrong well before then and continue to build on their value system, gradually working our way to the more important values – the more important and sometimes more difficult to understand. Definitely the values that are harder to stick by under certain circumstances.

But what exactly do we need to teach them for America to survive? That’s a very specific question. Parents all over the world teach their children different things. Every culture has different values. Every religion has different “rules”. What matters to the future of America so much that we need to be teaching all of our children and teenagers about it from the day they are born?

I submit to you that America is a concept – not just a place. The concept was built by our forefathers and needs to be taught THOROUGHLY at every level. History didn’t start with the Vietnam War, nor just before it with the Civil Rights movement. Certainly both were important events in the history of the United States, but our history – and the basic values our country was built upon – started much farther back. It is unfortunate for some of our students that some of their teachers believe nothing before their own lifespan mattered. As a result of such beliefs a great deal of emphasis gets put on the Civil Rights movement, Vietnam, politics in the ’70s, ’80s and ’90s, the first Gulf War, the current war, etc. This is all JUST MY OPINION, but what about the stuff that happened some 230+ years ago that led to the formation of this great country?

How come our children aren’t taught about the pioneer spirit that led men like Daniel Boone and Davey Crocket west in exploration? Sure, they get taught about Lewis & Clark and that’s important too; I’m not arguing that. I guess I just try to teach my children more about their personal contribution potential… What about the men who died at the Alamo? “Remember the Alamo” is a saying that, to this day, makes people recognize the fighting spirit of Texas and how a small group of people, with great courage and determination, held off a much larger force for far longer than anyone expected.

My own children have recently been moved by the story of the 300 Spartans who held off great numbers of the invading Persian Army in the Battle of Thermopylae. That 300 men could essentially commit themselves to death in the defense of their land makes my children stop and wonder: what do they hold of such great value that they’d be willing to die to protect it?

The family is an obvious answer and one I’m happy to hear my children give.

Beyond that? My two oldest children are both in the armed services: one Marine and one Soldier. They have taken an oath to protect and defend the Constitution of the United States and the country itself from all enemies both foreign and domestic. They stood up, stepped forward, raised their hand and took that oath. Yes, as their father I’m proud of them, but more than that, as an American I’m quite pleased to see two teenagers committing themselves to the service of their country. I know they’re not the only two. My daughter graduated from Basic Training with HUNDREDS of other new soldiers. It made my heart swell with satisfaction and a sense of patriotic renewal to see such numbers of men and women volunteering to serve. What struck me was this question: why weren’t there THOUSANDS?

Our country’s current population is well over 300 million. Even deducting 10% of that as illegal immigrants, we’re left with in excess of 270 million. With our troop strength (total of all military services) having peaked in the late ’60s / early ’70s at about 1.5 million, I have to wonder… why can’t we get just 1% to serve? That’s only 2.7 million people. Still in all, that’s almost double our greatest military strength ever. Sure, I know that there are budgetary restraints that limit the number of people in uniform. I also know that we spend more and more money on technology and technology SUPPORTS the soldier – it doesn’t win the war. Just 1%… that’s all we need. Where are all the one percenters?

Our goal as a country should be to stay strong and raise our children / teenagers to keep us strong in the future. We need to find a way to raise the one percenters… In fact, we need to find a way to raise two percenters who raise three percenters who raise four percenters and so on. If we could get 2.7 million in uniform this generation, followed by 5.4 million and then 8.1 million… do you think we might reach a point where the rest of the world didn’t mess with us simply because they’d be overwhelmed?

THAT would be the strength of America. THAT is what would be possible if we taught our children and teenagers the history and values of our country. THAT is what our country to be if the self-sacrifice and commitment of our forefathers was mimicked today. No, they weren’t perfect – but they were idealists and those ideals they used to found this country are still good ideals today. We should be striving to meet them. We should be teaching our children the value of striving to meet them. We should be focusing on making the next generation stronger knowing that they’ll pass that along and our country will continue to grow stronger. But if we ignore the opportunity to do so… then the ugly truth is that our enemies may well over-run us while our children and teenagers continue to watch senseless movies and learn only recent history.

Are any of us prepared to accept that?

Teaching Our Children to be Victims? 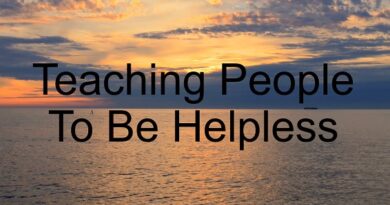 Teaching People To Be Helpless