“It’ll be just like shooting fish in a barrel.” We here that phrase used all the time. It’s just a figure of speech. What does it mean? Something will be easy to do. Why is shooting fish in a barrel easy? Because you have a “target rich environment.” For you folks who have never been in a combat-oriented position, that means you have an area so full of targets that you can shoot randomly into it and you’re still likely to hit a target.  Now, I’d like to discuss two ways that this applies to active shooter events and our preparation/response protocols for them.

First: Our schools, for an active shooter, are target rich environments. We take 20-30 children (sometimes more) and put them inside rooms with nowhere to hide and nothing to take cover behind. There may be places of concealment but not cover. (“Cover” stops bullets; “concealment” only hides you.) If you put ten classrooms on a single floor in one wing of an educational structure, you’ve put 200-300 students in nicely clustered little “barrels,” wherein an active shooter can go and start shooting.

In at least two cases I’m aware of, the shooter has gone so far as to restrict the size of their “barrel,” thereby guaranteeing themselves a minimum number of victims. At Nickel Mines, Pennsylvania the shooter took hostages in a one room school house. His victim count wasn’t high but we’ll all agree that ONE victim is one too many. At Virginia Tech, Seung Hui Cho chained the exterior doors of one wing of Norris Hall granting him access to three floors of the structure and reducing the potential exits for his victim “pool.” It took a SWAT officer and a patrol officer working together to breech a door with a shotgun… and that shot was recognizable to Cho as the announcement that law enforcement had arrived and his hunting time was over. He recognized it and took himself out with a bullet to the head.

One of our goals, as we discuss strategy for reducing losses to active shooters, should be to limit the target pool.  How do we do this? Code Red responses and protocols are a good step. Students between classes, packing into hallways and stairwells are all too easy to shoot into and create multiple casualties. A single classroom with 20-30 students in it is too many targets… but better than 200-300 on a floor with ten such rooms. So what can we do? We can insure that our response protocols, taught to those potential victims inside the targets, include locking AND BARRICADING the door; moving to the corner of the room out of the line of sight from any window in the door and getting behind anything that will stop or slow down incoming rounds.

Second: We need to set aside the gun control debate.  I want to use the “fish in a barrel” analogy to demonstrate, conclusively, that we are BETTER OFF if an active shooter uses a semi-automatic rifle than another weapon: the common 12g shotgun.  Create the visual in your mind: a 50-gallon wooden barrel full of water and fish; I mean so many fish that they have to swim around each other; you couldn’t put your hand in the barrel without touching several. Now imagine someone standing within five feet of the barrel with a shotgun.  Let’s say the shotgun is loaded with double aught loads (for those non-shooters reading this, that means a common 2.75” long shell holding 9 pellets that are .32 caliber each). If you fire ONE of those rounds into a barrel full of fish from a distance of five feet, there’s a good chance you’re going to kill nine fish.

Apply that analogy and scenario to a school room. If you use a semi-automatic rifle to fire into that room, you might hit one target each time you pull the trigger. I say “might” because the faster you shoot the less accurate you are and even skilled shooters quite often miss. But you fire one round out of a shotgun and hit between one and… several targets (students). So, realistically, a shotgun can be far more devastating but since they don’t look like an “assault weapon,” no one is calling for a ban on them.

One last thought I want to include here on the fish-in-a-barrel analogy: the fish never fight back. If they could it wouldn’t be as easy to catch them, right? So, say it along with me:

Stop trying to create legislation that will ban a single type of weapon and have (realistically) zero impact on active shooter incidents while restricting the rights of lawful gun owners coast to coast.

Do what we can to reduce the target pool (number of fish in the barrel) available for the active shooter to engage.

Make sure the fish (targets / students) are fully empowered and encouraged (and trained?) to fight back as necessary. 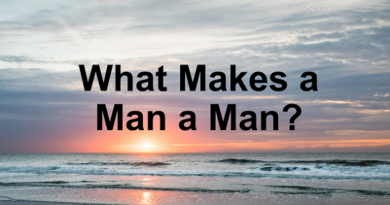 What Makes a Man a Man?